Demographics such as age, sex, ancestry, placement within the tomb, length of life, and relative worth can be analyzed to identify trends in the group of individuals entombed in Central Florida cemeteries.[1] Below illustrates the ages, sex, and decade of death for the 151 decedents.[2] Thirty-four other individuals were identified on the tombs via pre-need etching of their inscriptions, but since they are still living they were not included in the analysis. 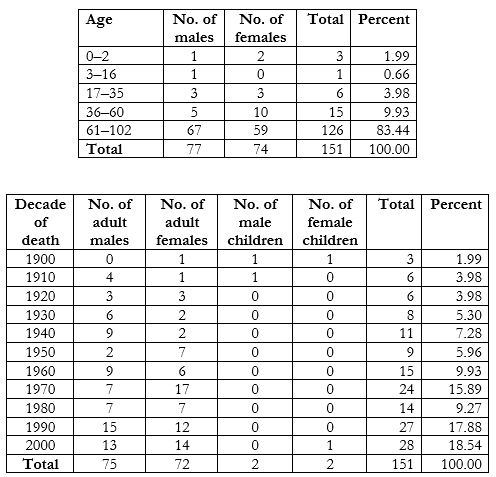 Cultures and religions traditionally have their own burial rituals. In order to determine the ancestry of the decedents, historical records such as the United States federal decennial census, Florida state census, and Florida death records were used to identify each individual. Five of the 151 decedents (3.31%) were African American—four entombed at Page Jackson Cemetery in Sanford and one at Woodlawn Cemetery in Gotha. Aboveground tombs for African Americans are unusual in Central Florida. African American cemeteries in the survey area boast many concrete vaults buried at various depths. Most bear the same pattern of wreaths on the ends, bunting on the sides, and a swirled surface imitating water. A number of these vaults were originally painted silver to enhance the symbolized water and flecks of paint are still visible on some. The water symbolism is a West African tradition said to emulate the bottom of a river.[3] The concrete vaults were excluded from this project, as the caskets are not aboveground. Page Jackson is an African American cemetery, and the three aboveground tombs, containing a total of four individuals, are unique within the large cemetery.

Religion also plays a part in the choice of interment style. Catholics, Protestants, and Reform congregations of Judaism allow entombment while the Orthodox Jewish do not.[4] Orthodox Jews practice inhumation with plain caskets and no vaults so that the body is returned to the earth quickly.[5] All Souls Catholic Cemetery in Sanford has four single mausoleums, and All Faiths contains many different religions (hence the name), including Jewish and Kabbalah mausoleums.

Religiosity can be identified in the motifs included on the mausoleums for this project. Symbolism included in the religious category includes angels, the Bible, crosses, doves, the Kabbalah Tree of Life, praying hands, the Star of David, and statues of Jesus and St. Jude. Studies of religious symbolism in cemeteries indicate that use decreased steadily after the Civil War, reaching the lowest point in the 1930s and 1940s.[6] Zelinsky’s study showed that use of religious symbols gradually increased beginning in the 1950s—as also reflected in Figure 19—but use has not reached pre-Civil War levels. There are religiously-based funerals, and many obituaries indicate a religious belief; however, much of the symbolism in cemeteries does not reflect any religiosity.  Only 22.5% of the symbols on the mausoleums are religious based. The period of the present study (1905-2008) coincides with Hijiya’s “modern plain style,” and he suggests that during the late nineteenth-century, mankind lost its faith in heaven, which affected the symbolism represented in cemeteries.[7]

PLACEMENT OF INDIVIDUAL WITHIN THE TOMB

Double-crypt mausoleums with male/female pairs (n=45) were analyzed to determine if there was a pattern to which crypt was filled first and where the males and females were placed. The first entombment was twice as often on the left side of the mausoleum. Males were predominately on the left, though not exclusively, which implies that they died first more often. There is no standard for which crypt is filled first nor which direction the body faces. The family of the deceased makes decisions such as these. Unless there is visible evidence, such as the placement of the inscriptions, this type of data is not recorded.[8]

United States federal decennial census and Florida state census records were used in conjunction with contemporary property tax records to determine median property values for the families in this survey.[9]  Fifty-five families were located in historic records. The median home value was $6,000 for the sixteen families owning property at the time of the 1930 U.S. census.[10]  Using nominal Gross Domestic Product per capita calculations, the $6,000 figure equates to $380,222 in 2008 dollars.[11] For the thirty-nine families found in contemporary property tax records, the median home value was $320,710. These figures equate to the economic status of the families and are equivalent between 1930 and 2008.

Salaries for occupations change over time. What was once a high-paying job may now not be. Some occupations of the heads of household listed on early census records include owners of service stations, jewelry stores, office supply stores, and barber shops, government workers, bankers, doctors, real estate brokers, watch makers, merchants, and farmers. There were also graduates of college, business school, and the Naval Academy. Most families using private mausoleums were affluent within their communities, as shown by their occupations and the median home values.

Though the families purchasing private mausoleums were affluent, the tombs are less elaborate than those found in other parts of the country. One of the possible explanations for the creation of architecturally simple tombs is the lack of prosperity of the overall communities. The South has the lowest median household income in the country, and it has consistently been that way.[12] Grandiose tombs would look out of place in the small community cemeteries of the area. Of the seventy cemeteries in Central Florida, only one is located within an affluent city—Palm Cemetery in Winter Park. This is also the cemetery that boasts twenty-seven mausoleums, the most of any in the area.

The median age for all entombments was seventy-seven years. Figure 21 shows the number of individuals by their decade of age at death. The range of ages runs from 0 (a stillborn infant) to a woman of 102 years. Only four children are in tombs; the stillborn infant is by herself and the other three are in a single family.[13] The next youngest in age is nineteen years. Overall, 83.44% of the 151 deceased individuals were over the age of 60 when they passed on. This percentage is higher than the overall cemetery population. For example, a sample of 1,868 burials at Greenwood Cemetery in Orlando has only 49.5% above age sixty and the median age is sixty years old.[14]

The segment of the population using mausoleums was employed in non-laborer occupations, which made them more financially secure. This security allowed them to afford better food and health care, increasing their longevity.

[2] The unknown entombment in Oakland Cemetery, Oakland, Orange County, is excluded from the demographic analysis.

[7] James A. Hijiya, “American Gravestones and Attitudes Towards Death: A Brief History,” Proceedings of the American Philosophical Society 127(5):357.

[10] Two of the questions on the 1930 U.S. census asked whether the home was rented or owned and its property value. (http://usa.ipums.org/usa/voliii/inst1930.shtml)

[11] “Six Ways to Compute the Relative Value of a U.S. Dollar Amount 1774 to Present.” Online at http://www.measuringworth.com/uscompare

[12] Consumer Income Reports for 1947 through 2007 are available online through the U.S. Census Bureau at http://www.census.gov.

[14] This small sample from Greenwood Cemetery, Orlando, Orange County, contains 2,053 individuals with age information interred between 1870 and 1998. The 185 stillbirths in the sample were not included in the calculations for median and overall percentage.